An Environmental Economic Defense to Reduce Reliance on Chinese Imports 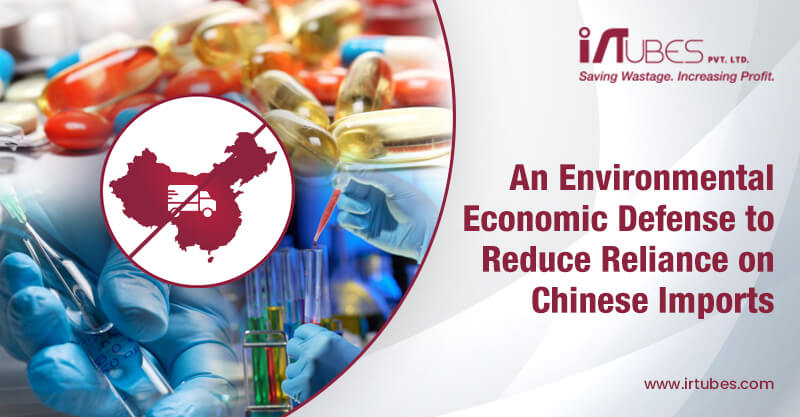 China has deescalated their aggressive military stand in the Galwan area and the latest is that they have pulled back a kilometre or two from their earlier position. The governments of both countries are in talks to ensure we do not have an all-out war.

But the anti-China sentiment in India remains the same. The standoff, where 20 of our soldiers were martyred has given rise to an emotional outburst of epic proportions. People have been shouting from the rooftops to ban imports of all Chinese products. Whatsapp messages are doing the rounds banning Chinese apps regularly in use in our country. I think the Indian Government has made an excellent move by banning the 59 apps.

However, the pharmaceutical and specialty chemicals industry, most especially, depend on China. In 2019 we had a trade deficit with China of $50 billion, where 65% of the imports was from the pharmaceutical industry. Much of these imports are avoidable as India has the capacity to manufacture the same. For example, a number of units in India have capacities for the production of several drugs such as Ibuprofen, paracetamol metronidazole, and yet India imports from China leading to under utilization of capacity in India.

We have a similar story in the Chemicals Industry. India imports around 1 lakh tonne per annum of citric acid from China. India was producing citric acid but closed its plants due to import dumping from China. It was more economical to import than manufacture.

“A blanket ban on Chinese imports is not feasible,” said Harsh Pant, a professor of international relations at King’s College London. “It would be a self-defeating proposition.”

The fact is that China is a non-market economy and several hidden subsidies and support is given by the Chinese government to help the Chinese industries export the products at a low price and there is no transparency in this.

Indian buyers and traders buy products from China due to the low price and liberal credit terms, even if the quality and specification of the Chinese product is less than that of the product produced in developed countries.

Curbing the import of products from China is now a national necessity to protect India’s interests. India and the rest of the world is looking at ways to curb this high dependence on China through various initiatives. My point is apart from this we can ADDITIONALLY approach it in a different way.

How do we approach this issue from an environmental point of view? What more can be done?

Covid 19 has made aware the importance of operating within environmental norms when it comes to health and safety. Can we use this awareness to regulate the flow of Chinese goods into India?

Europe and other Western countries have tried to do this, especially with regard to chemicals. People who manufacture certain rubber, plastic articles have to give an undertaking that the products are REACH and ROHS (Restriction of Hazardous Substances) compliant. People who use chemicals in these products have to obtain REACH, ROHS and other environmental compliance from the people who manufacture these chemicals. Documentation to ensure compliance will need to be supplied by the manufacturer and this is not an inexpensive proposition. Further, the actual manufacturer might use subcontractors who may find it difficult to adhere to this compliance.

Can the Indian government, likewise, implement some compliance while importing from China that ties in with our Environmental norms for all goods imported from China? We can request this compliance from Chinese suppliers and base our own compliance strategy on this information. If they do the Chinese manufacturers will have to meet these norms. This will increase the cost of the Chinese products and it will make products from other countries more competitive against the Chinese products. It will also be more attractive for Indian companies to make these products in India and to a certain extent the ‘Make in India’’ would be achieved.

India needs to become an economic powerhouse and make a deep dent in China’s pockets. This is the only way it can control China’s expansionist tendencies.

Another could be to sign on F&A with the EU. Of course, this may mean that the entire supply chain would have to remain between the two markets to qualify for zero duty. With our dependence on Chinese raw materials this may initially prove to be difficult but without any pain there will never be any gain. There is no point in being economically defensive, we should attack from the very first ball that is bowled.