Effect of Particle Size in Dispersions for Latex 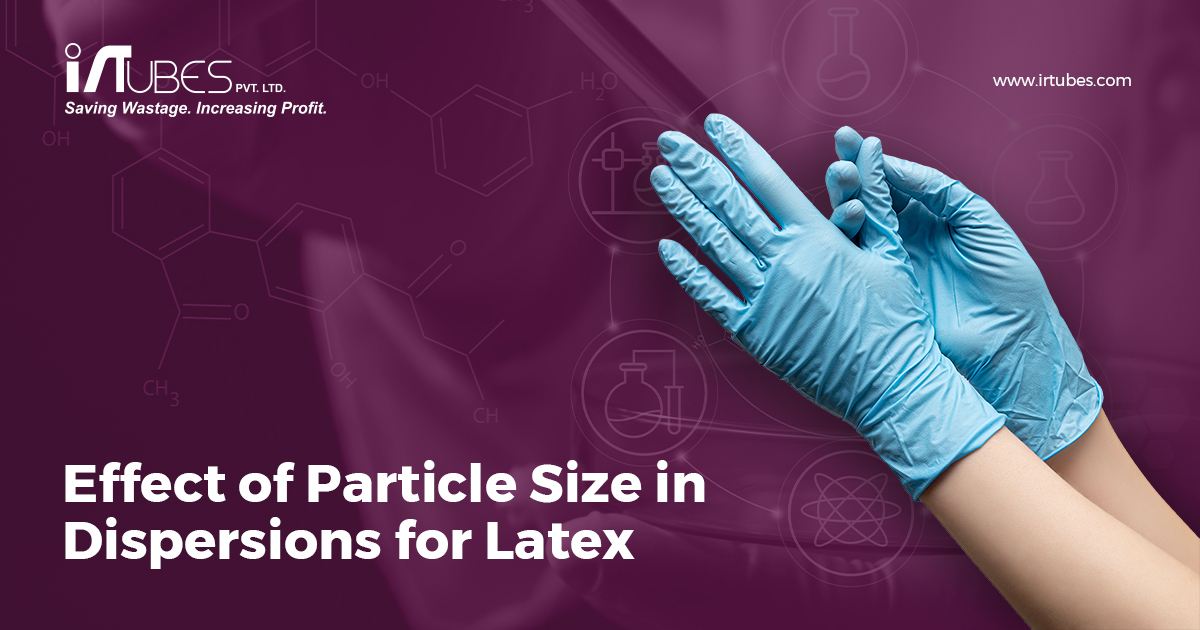 The glove market has been growing and will continue to grow at a much higher rate than the general economic growth.  It is estimated to grow at a CAGR of 11.4% during the forecast period of 2022-2028. The growth of the India medical gloves market can be attributed to the increasing prevalence of various infectious and chronic diseases and the rising demand for diagnostic tests. One might say that this industry is almost recession proof.  There has been greater focus during and after the pandemic on health issues and these issues are here to stay.  State governments, especially in the north of India have ramped up their healthcare delivery and has opened new markets for medical gloves.

Despite improvements in technology and know-how, producing the required quality of additive dispersions for latex is not as simple as it sounds. The dispersions contain solid particles dispersed into the liquid (water) phase. Mostly the solid particles, especially additives like sulphur, accelerators, pigment and zinc oxide have a significantly higher density than water. As a result, there is a strong natural tendency for these materials to settle down due to the forces of gravity. This can result in the dispersion being un-usable due to heavy sedimentation, and of course after compounding the dispersion into latex, the same natural forces apply to the solid additives now inside the compounded latex.

The medical gloves industry has had to overcome concerns relating to health issues, including N-nitrosamines and Type IV allergies, in the rubber products.  We now see safer chemical accelerators used in natural rubber latex.

Zinc diisononyldithiocaramate (an accelerator) is highly crystalline compared to the more traditional accelerators like zinc diethyldithiocarbamate (ZDEC) or zinc dibutyldithiocarbamate (ZDBC) which are amorphous.  Being crystalline and amorphous they are water insoluble and have to be milled as dispersion to reduce their average particle size to an appropriate level.  If this is not done to specifications, it will lead to sedimentation in the dispersion and compounded latex and would be wasteful and will lead to reduced quality in the finished products.

The accelerator (ZDNC) is manufactured as a free flowing ‘hard’ crystalline material of high particle size.  One would question why time, energy and money is spent to reduce the particle size (typically less than 5 microns) if particle size did not matter?  What follows is technical data to support this fact.

We have summarised the importance of Particle size of active ingredient.  Readers, if interested, may read the validation of our findings after the summary.

Studies* have been carried out keeping the following criteria in focus:

There is now evidence to show that if the accelerator particle size is reduced to 3 to 6 micron or less, then the accelerators have more activity and hence less accelerator is required to produce optimal latex curing.

A brief summary on the study that aims to 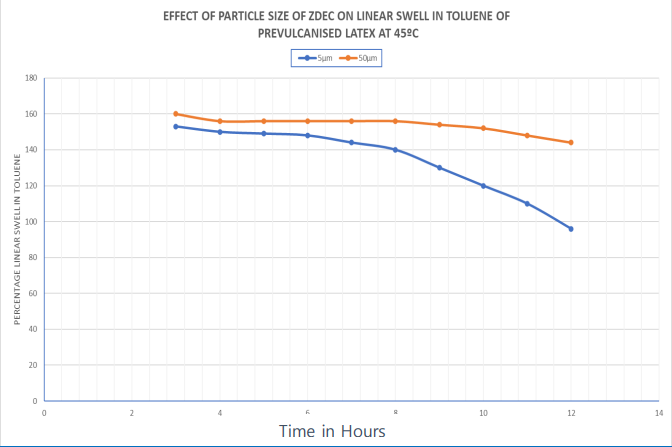 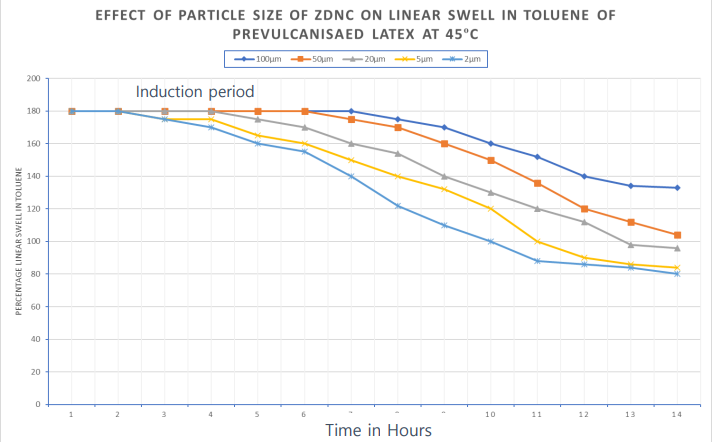 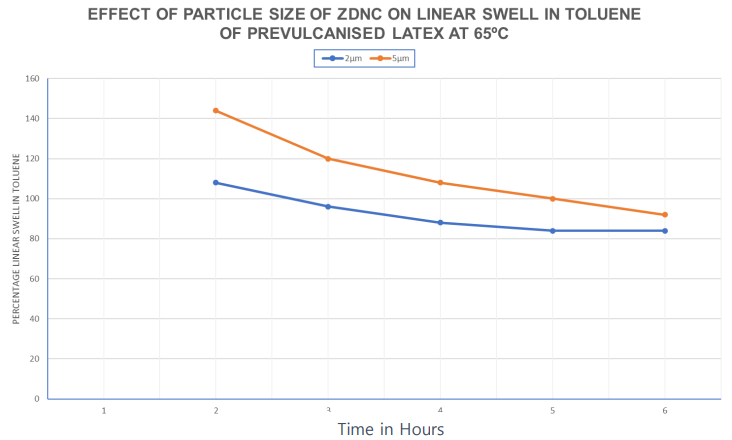 THERE IS A CLEAR LINEAR RELATIONSHIP BETWEEN MAX. RATE OF CROSSLINK FORMATION AND RELATIVE SPECIFIC SURFACE AREA OF ZDNC 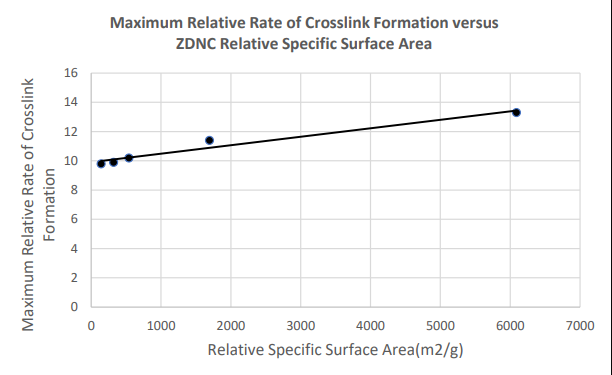 Re-cap from the data above

The data clearly shows that the particle size of the ZDNC accelerator and consequently the larger the specific surface area, the more efficient is the vulcanisation of the NR latex.  Given this fact there are a number of benefits for glove manufacturers should they use readymade dispersions like ZDNC.

With improvement in ingredient efficiency, improvement in handling of the accelerator dispersion upon storage or use in latex, significant reduction in chemical dosage thereby leading to reduction in defects in the rubber articles, manufacturers who use these dispersions can only hope to gain.  As pointed out in the article (link) by Mr. Paul McKavanagh

Coupled with these benefits are also the benefits of health, safety and the environment where handling hazardous and dusty chemicals by labour is minimised.  Reduction in chemical effluent and waste is also an area that saves the environment.