Here’s How BPA and its substitutes, in PET and PVC Can Harm Your Health 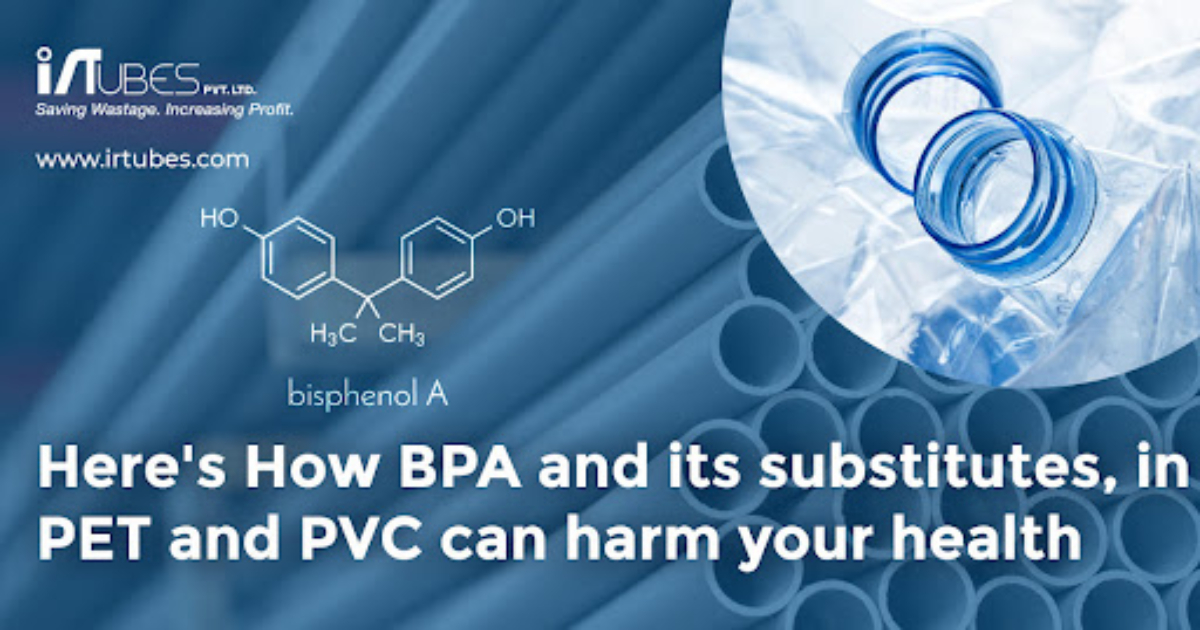 On the 8th of July 2022 Business Insider ran an article, “High level of toxic chemicals found in drinking water across the nation”. The article stated that the level was 29 to 81 times higher than the prescribed limit. This study was from 15 drinking water samples collected from across the country, with a sample from Bathinda (80.5 ppb) with the highest concentration while lowest was found from tap water in Indraprastha, Delhi at (29.1 ppb). Well known endocrine disruptor chemicals (EDCs) were found in the samples. What is disconcerting is that EDCs (Endocrine Disruptor Chemicals) have a number of adverse effects on human health.

What Is The Endocrine System In Humans?

Our endocrine system encompasses all the body’s different hormones, regulates all biological processes in the body from conception through adulthood, to old age. It includes development of the brain and nervous system, the growth and function of the reproductive system, as well as metabolism and blood sugar. Thus, we are asking for trouble when anything disrupts the smooth functioning of our system.

When BPA Leaches From Pet Bottles?

To get a better understanding of what PET and BPA are, the following are the descriptions for both.

Polyethylene terephthalate (PET, PETE) better known as PET is clear, tough and shatterproof plastic. Its ability to provide a barrier to oxygen, water and carbon dioxide makes it ideal for carbonated soft drink bottles for water, juice, sports drinks, beer, mouthwash, salad dressing, peanut butter, jam, jelly, pickles and microwavable food trays are also made from PET. Therefore, one can say that its use is ubiquitous.

Although we tend to use and reuse these very convenient bottles, PET was found to break down over time and leach into the beverage when the bottles were reused. Therefore, it’s best to recycle these bottles without reusing them.

What is Bisphenol (BPA)?

Bisphenol A (BPA) is a chemical produced in large quantities for use primarily in the production of polycarbonate plastics. It is found in various products including shatterproof windows, eyewear, water bottles, and epoxy resins that coat some metal food cans, bottle tops, and water supply pipes.

In 2009, German researchers at Goethe University found that estrogenic compounds leach from the plastic into the water. Initially, and as of today too, research focussed on bisphenol-A (BPA), propounds that PET plastic bottles are safe, as far as human health goes.

There have been diverse viewpoints to the conversation and debate as to whether BPA can be found in PET and in re-used PET bottles.

The author of this article goes to great lengths to assure us BPA in plastic water bottles is safe. However, this fact has not satisfactorily been established, if one has to do rudimentary research on BPA and PET, no study has definitely ruled out the harm that BPA causes. Martin Wagner of Goethe University says it is too soon to rule out BPA and there is strong evidence that some ‘as-yet-unidentified’ chemicals in these plastics can interfere with the endocrine system in humans. This was tested out by Wagner and a colleague using genetically engineered yeast to analyse 20 samples of mineral water. Nine samples came out of glass bottles, nine were bottled in PET plastic and two were in cardboard, juice-like boxes.

Specialised yeast was used, which changes colour in the presence of oestrogen-like compounds, revealed estrogenic activity in seven of the nine plastic bottles (and both cardboard samples), compared with just three of the nine glass ones.

Overall, Wagner says, levels of these compounds in the water were surprisingly high.

The Snail Effect: BPA and PET bottles, a potential hazard

Two months later the female snails had more than twice as many embryos inside their bodies as compared to the control set of snails in glass-grown snails. He does caution us saying water is yet healthy and until the compounds at work are fully identified it would be premature to say for sure that the plastic has leached EDCs. Tap water, yet shows much LESS oestrogen activity and he for one has switched to drinking tap water.

If that is not all, twenty years ago, Maya Wei-Hass, an award-winning science writer for National Geographic were looking into the reproductive effects of BPA in mice. The mice were being fed BPA through a dropper; the control group didn’t get anything. They were housed in a BPA free cage. Soon they discovered that the plastic caging holding the mice was damaged and the mice started showing genetic issues. The cage was leaching bisphenol S, or BPS, an alternative to BPA, suggesting that replacements also, to BPA, were affecting endocrine systems too.

In 2012 as a unique collaboration between NIEHS, the National Toxicology Program, and the U.S. Food and Drug Administration (FDA) aimed to improve the understanding of how exposure to BPA affects human health with a special focus on the low-dose range. Former DNTP Senior Scientist John Bucher, Ph.D. played a key role in initiating CLARITY-BPA and worked closely on the project and this is what he had to say, “Although relatively low exposures to BPA led to essentially negative findings in the core study, many of the published university papers reported adverse health effects,” said Bucher. “This suggests that current guideline-compliant studies used in regulatory decision-making may not detect all potential hazards from real-world exposures to chemicals, especially hormone-disrupting substances such as BPA.”

A Larger Problem: When PVC Pipes Use BPA

Polyvinyl chloride (PVC or vinyl) when polymerised can contain, and can use BPA as a stabilizer/anti-oxidant. PVC can be compounded to being flexible and is identified with the number 3 (recycling code). When flexible, PVC is used for medical bags, shower curtains, shrink wrap, and deli and meat wrap. PVC pipes are a widely recognized modern alternative to metal piping. It’s known as a low-cost solution with the strength, versatility, durability, and easy installation process to back its popularity

The rigid PVC comprises 70% of all manufactured PVC. This is used to make construction materials such as pipe, siding, window frames, railing, fencing, and decking. PVC has been said to have had a major impact on improving life around the world.

It is known that all water carrying pipes are made of PVC and pipes for agricultural use is extensively used in our country. Products now carry the sign BPA free, but what it not clearly spelt out and as stated above is that substitutes of BPA maybe used in the manufacture e.g. BPS

In a bid to negate the downside of using BPA, manufacturers choose BPS as a substitute, since it allegedly leaching less from packaging. However, studies have also shed doubt on this, and sampling has shown that adults have high amounts of BPS in their bodies. BPS has been linked to abnormal cell functioning leading to obesity, diabetes, birth defects and cancer.

In vitro studies have also linked BPS to hyperactivity and development of heart arrhythmia. Studies, published by the University of Missouri-Columbia, looked at the effects of BPS on mouse placenta. It found that BPS lowered the amount of serotonin in the placenta, meaning that the baby got a lower amount of the hormone as well. Lower levels of serotonin are linked with impaired foetal brain development and emotional problems.

What Can Be Done?

Companies like Aquaspersions have developed anti -oxidant dispersions that are far superior to BPS. Using responsible chemicals always comes at a cost. However, the cost to the physical and mental development of humans, must also be factored in, as responsible corporate citizens. During the polymerisation process one should use other stabilisers/anti-oxidant environment friendly dispersions, PVC resin and other polymer manufacturers will do well to further our quest for a more environmentally friendly and sustainable world.

We have yet a long way to say with any kind of certainty that BPA or BPS has a definite adverse impact on the endocrine system of humans. There is enough evidence to show that there is harm being done and we would be wise to give cognisance to this.

In an article the author here Susan Goldhabe cites how what is happening to BPA fits into a more significant trend of using science to justify the desired outcome. This should in fact make us pause and think of using chemicals that do not harm lives.